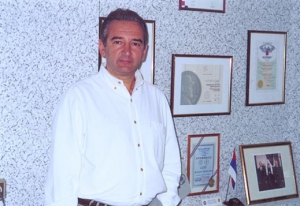 "New millennium is not only the bound of the new time calculation; it is a new attitude towards many aspects of our life, new psychology, new people and, of course, new medicine. A worthy place in it is taken by apitherapy, which more and more claims the right to be called the medicine of the future".

When we speak about wonder, we mean something, what we cannot explain. Seven wonders of the world, created by a man, are widely known, but there are almost inexplicable things, which appeared long ago before the mankind, and which will still be unexplained for a long time. One of them is, of course, aBEE.

And the things, produced by a bee, can always be admired. Just imagine: a spoon of pollen includes a day's doze of vitamins and microelements; royal jelly, which is considered to be life elixir, ten times enlarges the bee's life; propolis is the only inflammatory substance, which can resist any pathologic flora; and, of course, honey.

Together with a bee, apitherapy (that is the bee venom and bee products treatment) came from ancient times.

But until lately apitherapy was used mainly as an additional and secondary component of official medicine. To make it the main method of treatment and to give it the scientific base - that is the aim of the international medical center "API", which has worked out the new medical and apitherapeutical direction - clinical apitherapy. 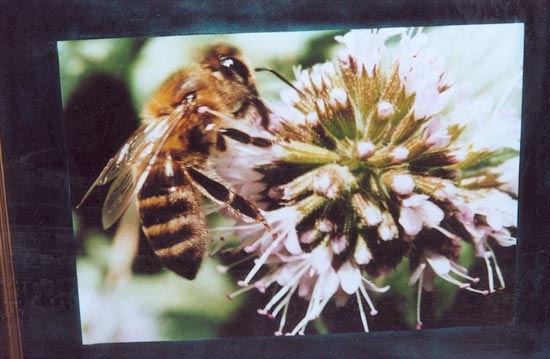 Clinical apitherapy is a kind of result. Nowadays it is not enough to speak about apitherapy only as of something additional, as of separate cabinets, as of prophylaxis, and as of food supplement. None of the existing alternative methods can be compared to bee venom, honey, propolis and royal jelly treatment. We declare that, not only because we are apitherapeutists, but, because it is our reality. Reasonable attitude and high professionalism, based on scientific research, allow us to get significant results in the treatment of many diseases, which are slightly healed by common methods. There is a great amount of such diseases nowadays:

As a main medicament we usebee venom, which still cannot be created synthetically, and the effect of which astonishes everybody.

In the treatment ofpsoriasisjust after the first procedures psoriatic plaques disappear; in the treatment ofvaricositynot only the cosmetic defects are removed, but the blood composition changes, which means that the very predisposition to that disease is removed. Interesting is the fact ofblood pressureinfluence. The pressure can be either increased or lowered; i.e. it can be normalized. And the treatment ofarticular pathologycan be compared today to any other, even to very expensive one.

Unfortunately, because of the society's poor health, people oftenmisuse medicine. It can give a certain effect, but it won't be healthy, because any medicine suppresses the immune system. The man falls ill and gets weak and has to cure all the time. But we've got only one liver and one pair of kidneys, and it is difficult for them to stand such an enormous intoxication. Moreover, the medical addiction is formed, which is a common thing today.

Bee venom has a multicomponent structure. It includes amino acids, toxic peptides (melittine, secapine, MSD-peptide, cardiopep, adolapin), esters, biogenic amines, proteins with enzymatic effects (phospholipase A2, hyaluronidase), and mineral substances. The protein complex of bee venom is the main part of the structure, and it determines the various pharmacological influences on the organism.

The venom activates a whole system of unspecific defence of the organism. Regulatory peptides' family (apamin, MSD-peptide, melittine, etc.) influences the organism directly and indirectly, by modulating all regulatory systems. Peptides have a number of amino acidic consequentialness coincidences with 3-10 link peptides of the own organism, and that's why are not strange to it. It makes the various functions and universal therapeutical activity of the bee venom more understandable. Bee venom is used in the treatment of diseases, characterized by the presence of the focus and diffuse atrophic processes in the cerebral brain cortex. Bee venom can influence directly its trophism, because apamin, due to the small size of its molecule, is one of the few substances, which are able to cross the blood-brain barrier, increasing the biogenic amines synthesis in the brain structures. Bee venom includes 18 irreplaceable amino acids, which allow it to influence actively trophic processes. Melittine is able to activate together with the peptide (cardiopep) biosynthesis of prostaglandins in the brain vessel walls. All that aids vasodilation and removes headache spasms. It also influences vegetative and sympatic nervous systems, increasing the electrical activity of the reticular and brain cells. It also has a great anticholesterol signification, anticoagulative and thrombolytic peptide effect, which allow to restore actively the trophic processes, to increase physic and psychologic activity. The venom improves impulse conduction in the nerve fiber; it aids the opioid peptides (endorphins, enkephalins) production, has a great sedative effect, and causes no addiction and negative effects. The venom activates the hypophysis-epinephros system, has an immunocorrective effect, improves the adaptation possibility, and normalizes the sleep, appetite, mood, and the whole condition. Peptides have prophylactic and medical anticonvulsive effect, which hinders the epileptoid syndrome development. All that explains the high results in the bee venom treatment of such diseases asParkinson's disease, Multiple sclerosis, post strokes, post infarctions, Infantile Cerebral Paralysis, etc.

Bee is asingle-use syringe(created by nature), which is rather effective and has, at the same time, no danger of infection.

If there are no contraindications, bee stinging will be the most effective means of using bee venom, becausefour main factorsbegin to work:

All this, in connection with specially worked out programmes and complexes, reminds sometimes wonder. And it isn't occasional that nowadays clinical apitherapy allows to widen largely the possibilities of the most existing directions in treatment and rehabilitation.

For example, it is known thatpsychotherapywas weak in the treatment of heroin addiction, and bee venom, influencing the brain cells' sensibility, allowed to increase the reception of the imposed information.

When there aremotion activity disturbances, it is not enough to change and remove the physical factor; but it is important to destroy the stereotype and to form the new reflex. It became easier to do that in connection with kinesitherapy and the stress factor of the apitoxin influence.

Bee stinging is areflex influence. It is well known, that the Chinese medicine and, particularly,acupuncture, can do a lot. But acupuncture is a mechanical stimulation of the biologically active points, and bee stinging is also the venom introduction. It contributes much to the effectiveness. However, correct and professional attitude is important in the bee venom treatment. We shouldn't forget that it is VENOM!

Venom must give a result and shouldn't be toxic.

We change the existing and outdated methods. The old principle - if there is diagnosis, there will be a scheme of treatment, and nothing should be added - remains in the past.

Of course, our longevity and our health are important for us. But all these should become a certain conquest of a Man. It is possible nowadays to influence the most factors, on which our longevity and health depend. One of the main is a hormone balance.

Today a programme of the apitoxin usage for the support and necessary correction of the hormone balance has been worked out. It opened up the new phase in the development ofmodern cosmetologyand led to the creation of the firstprofessional apitherapeutical serieswith its quick and multiple effects (from the youth restoration of the face to the body shape correction).

New points of view improved the quality of the dermatologic problems treatment (neurodermatitis, eczema, psoriasis). To heal only the skin is useless. At the same time we can get a really good constant remission by restoring the complex of disturbances, which cause the disease, by improving the connective tissue microcirculation, by reflectring, and also giving neurotrophic and psychotrophic effects.

A specialized in-patient department, which uses all the existing apitherapeutical methods of treatment (from bee stinging to ultrasound influence) and a variety of apitherapeutical medicaments, has been working for many years in Chelyabinsk. Everything here is different from the common hospital, because of its comfort, service, method of specialists' selection, and, of course, it's coordinated work.

А man's organism is considered to live for 150 years but we live only half that time. Let's think about that and not miss the chance to live longer, look younger and be happier. And apitherapy, a wonder given to us by Nature, the medicine of the Future, will help us!